Firmicutes also have PULs, Uncovering the mechanisms on how a prominent human gut Firmicute munches on β-mannan

Back in 2014 we acquired funding for a project called “exploring hemicellulose from woody biomass as a potential prebiotics” (Fig. 1).

Together with Prof. Maher Abou Hachems lab at DTU (Fig. 2), which at the same time had funding from the Independent Research Fund Denmark, Natural Sciences (grant no. 4002-00297B) and Prof. Eric C. Martens’ lab at the University of Michigan (Fig. 3), we went on the quest of unravelling how Firmicutes are dissecting complex polysaccharides. 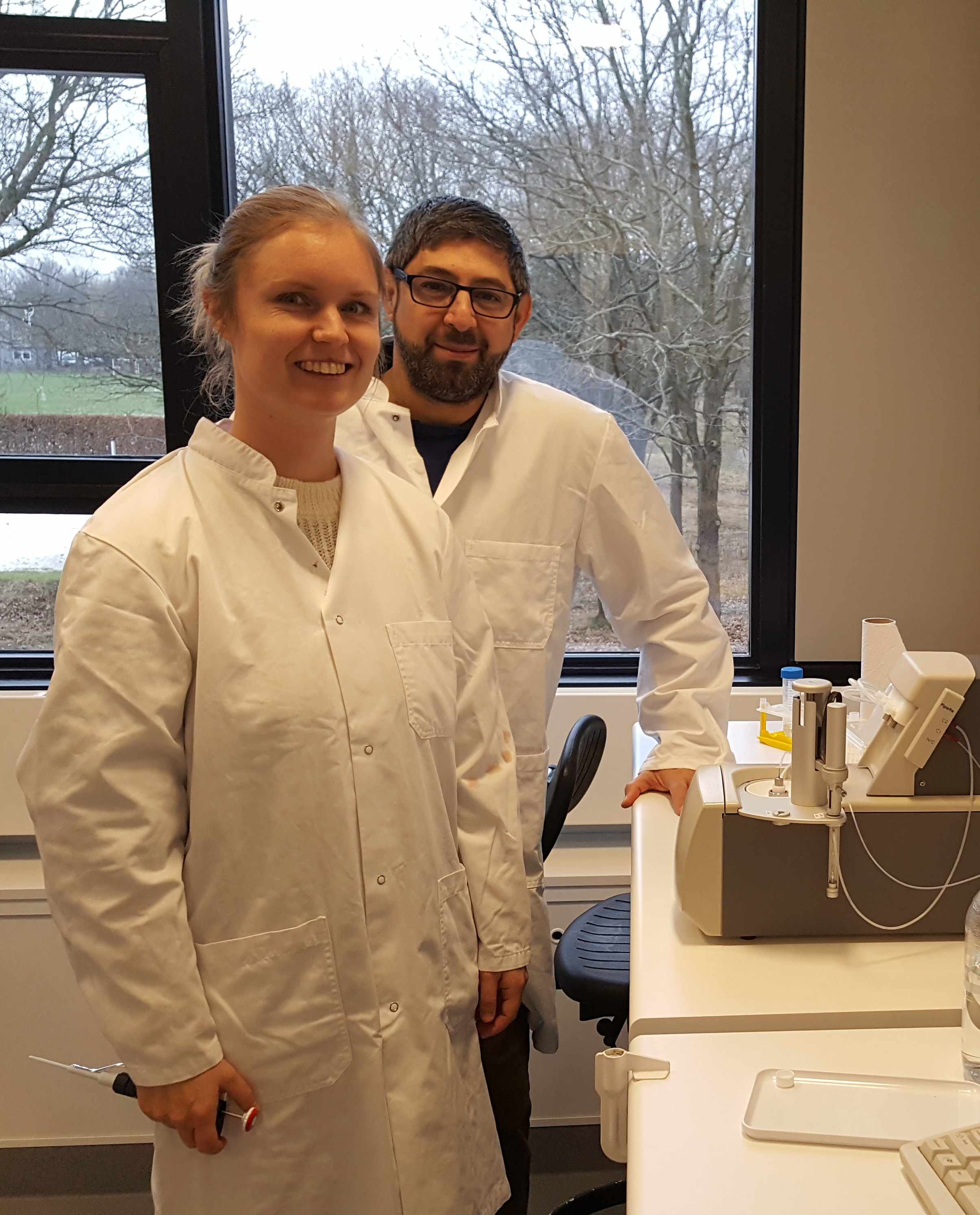 Fig. 2. Maria Louise Leth and Maher Abou Hachem in the lab by the ITC.

Compared to Bacteroidetes the knowledge on how the Firmicutes phylum is utilizing its substrate is largely underexplored. More and more evidence is accumulating for the clostridial cluster XIVa bacteria (belonging to the Firmicutes phylum) having beneficial effects [1]. This bacterial group ferments dietary fibers into butyrate which serves as the primary energy source for colonocytes and it exhibits anti-inflammatory and anti-carcinogenic properties in the distal gut. Roseburia intestinalis is a great example in this respect. It is prominent in the human gut and a large body of studies point in the direction of this bacterium causing several positive effects on its host, and hence potential probiotic. In a previous study [2] and in our paper published today by Nature Communications (The human gut Firmicute Roseburia intestinalis is a primary degrader of dietary β-mannans), we explored how these prominent bacteria degrade the two abundantly available hemicelluloses, xylan and β-mannan. These are widely available in our diets, but also present in trees as analogous structures (Fig. 4). 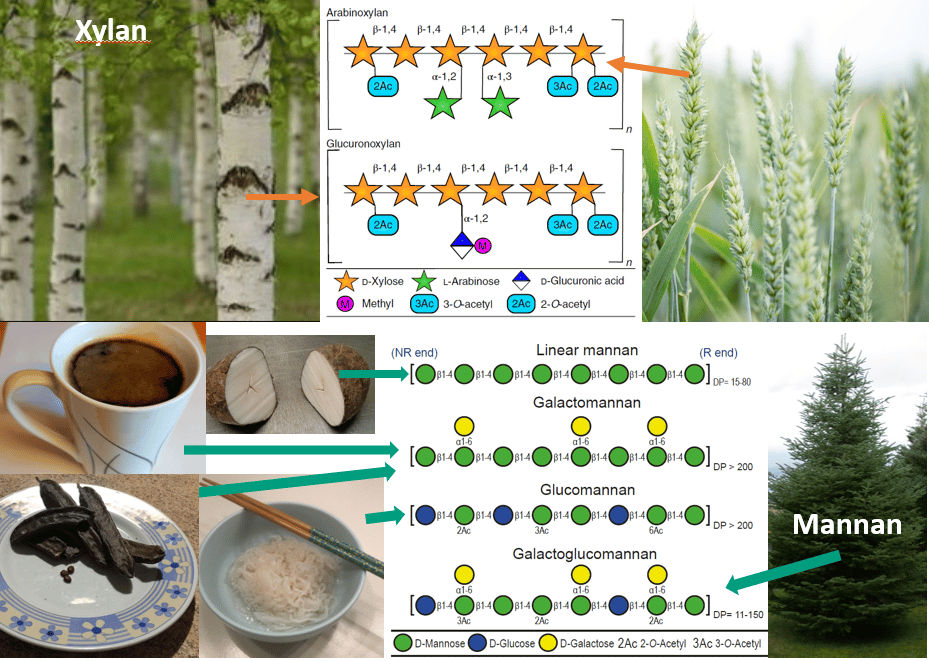 β-Mannans are abundant in certain nuts, coconut and coffee beans and legume seeds. In addition, they are widely present in the human diet due to their applications as stabilizers and food-thickening agents, particularly in baked products, ice creams, cream cheese, condiments and canned soups. Several of these polysaccharides are naturally acetylated. This adds further complexity to the polysaccharides, a complexity that several gut microbes respond to by producing esterases to aid efficient degradation (Fig. 5)

Two R. intestinalis gene clusters have evolved for the degradation of β-mannans; these encode about 20 highly specific proteins for capturing, degradation and internalization of these glycans. The systems are very different from Bacteroides. Microbiologists agree that substrates selectively stimulating certain bacteria would be helpful in intervention [1], thus complex substrates may facilitate growth of microbes with defined utilization systems that nourish on these substrates in a “selfish” manner.

Due to the dimensions of the work, which encompassed many fields, several experts were involved. Postdoc Sabina Leanti La Rosa, based at NMBU, started a systematic and thorough biochemical characterization of each component of the machinery followed by in vitro growth experiments. The transcriptomic analyses were performed mainly by PhD student Maria L. Leth and Prof. Christopher T. Workman at DTU. Dr Morten E. Hansen looked at the preferential binding of the mannan-binding transport protein and carbohydrate binding modules (CBMs). Two key collaborators that shaped ideas for the publication were the proteomics expert Dr Magnus Ø. Arntzen and anaerobic systems expert Prof. Phil B. Pope at NMBU (Fig. 6). A Roseburia manuscript was born after several meetings and about 15 drafts!

Hemicelluloses in woody biomass are highly similar to β-mannan and xylan found in nutritional sources. Being a carbohydrate- and biorefining-focused lab, we set up to produce β-mannan from wood with the goal of testing the potential of this polysaccharide to selectively promote β-mannan-degraders. We sought a sustainable process that is cheap to produce, environmentally friendly and avoided the use of chemicals. This was achieved in our brand-new biorefining facility at the Norwegian University of Life Sciences using steam explosion, a process that employs high-pressure steam to break down the structure of wood (in our case a Christmas tree alias Norway spruce) followed by hot-water extraction of the β-mannan fraction (a process developed by Leszek Michalak and Bjørge Westereng). Once the preparation was ready, it was handed-in to the Martens’ group, based at the University of Michigan. Lab manager Nick Pudlo, PhD student Robert Glowacki and Dr. Gabriel Pereira tested the effect of the β-mannan preparation on mice colonized with a representative human gut microbiota during intermittent dietary-fiber deprivation. It was an exciting surprise to observe that supplementation with as little as 2.5% Spruce galactoglucomannan was sufficient to observe a rapid increase of R. intestinalis and boost the relative abundance of the beneficial bacteria present in the community. In addition, we observed a decline in the relative abundance of the detrimental bacteria (protein and mucin degraders), emphasizing the importance of the health-promoting effect of this wood-based dietary fiber. While we are not advocating eating wood, we believe that there is great potential for this polysaccharide as it has been seen with other prebiotics. Further investigations have been planned to follow up on the potential prebiotic effect in monogastric systems.

In conclusion, through this collaborative effort, our study reveals the mechanism by which R. intestinalis metabolizes β-mannan and show that these polysaccharides promote beneficial gut bacteria. These findings provide the basis to further explore how these fibers behave in a real gut setting. If confirmed in monogastric systems, β-mannans may be used to design intervention therapies to restore the abundance of beneficial species after dysbiosis.