“By the way, it’s Shigella that consumes the most oxygen, not neutrophils. Is that normal?”

We would like to share with you a short story on our recent paper and how all our work began. We focus on our very personal and subjective experience, limited our views to only a small portion of the research related in our paper. We hope you find it fun; we did!

Let us go back to the end of 2012 when this journey was just beginning...

I had known and worked with Ellen for a year or so already. I was then a Research Engineer working in the imaging facility of the Institut Pasteur, led by Spencer Shorte and Nathalie Aulner. Before starting to work on the project presented in this paper, Ellen, then a postdoc in the laboratory of Philippe J Sansonetti, had contacted me about developing an imaging methodology to examine Shigella flexneri during infection in the guinea pig colon.

The methods we developed together, JY and myself along with other lab colleagues, were the subject of a previous paper [1]. This type of quantitative imaging was novel in bacterial pathogenesis, mostly because of the shear expanse of such in vivo experiments.  We were a bit crazy to undertake such exhaustive work, but it paid off.  Figure 1 shows an example of the type of images we acquired with the resulting imaging technique. Using an automated spinning-disk confocal microscope (a Yokagawa CV1000), we could acquire large portions of infected Guinea pig colons (sometimes up to a 1 mm) with a high enough resolution that we could delineate individual bacteria in a 50 µm thick slice of the tissue.

Normally, tissue imaging, particularly for the gut, is very hard. There are always spurious bits that compromise the image quality; tissues are very fragile, and their preparation for imaging is very sensitive to poor manipulation. But Ellen had very able hands and mad lab skills. Plus, the bacterial strain we used was so bright in fluorescence microscopy that even with a low magnification objective an isolated bacterium would generate an unmissable signal, and the background signal was relegated to very low intensity values compared to the bacterial signal. Finally, the actual imaging of the samples was relatively painless on our automated spinning-disk compared to our initial attempts on a classical laser-scanning confocal microscope. I still have the calculation we made with Ellen about the time required to image the 10 cm of the colon: 95 hours in a row, with user interaction requiring focused attention every 10 or 15 minutes, so this modality was not an option.  In the end, we used the automated spinning-disk system to address several questions, the main one being whether Shigella would preferentially target certain structures or cells in the colon at early stages of infection, and in the end, we found that these bugs were targeting the mouth of crypts.

Figure 1: Example of an image acquired according to the protocol presented in Arena et al., 2015.

By the end of 2014, we had this imaging and analysis methodology well underhand.  Not only that, but we were having a great time working together and had mastered effective communication bridging biology, microscopy, and computational ‘languages’.   We were inspired by this work; quite literally, as it resulted in a few original paintings by my hand as seen in Figure 2. At this point, regarding these particular imaging techniques, we thought that we had brought it to a point of maximum complexity and capacity; to be frank, we were glad to be done with such a large-scale project, but one of our other colleagues had other ideas.

Benoit Marteyn, the corresponding author of the associated paper for this story, also a postdoc at the time in the Sansonetti lab, then approached Ellen and I about applying this methodology to another story of his. Benoit was interested in investigating oxygen consumption in tissue during infection.

Benoit had his hands on a molecular tool that would make it possible to measure oxygen consumption in tissues, EF5 [2]. EF5 is a molecule that accumulates in cells, in quantities decreasing with local O2 tension. His strategy to measure O2 in infected tissues during Shigella infection was to inject guinea pigs with a solution of EF5, then challenge them with the bacteria. The guinea pigs were then sacrificed, and the colon quickly fixed before EF5 could diffuse away from the cells. An antibody against EF5 was then used to reveal the hypoxia levels, providing a “snapshot” of the O2 profile in the colon epithelium.

Initially, Benoit approached us because he wanted to know how the O2 consumption was modulated by the immune system response to infection, adding another key player to this story. Shigella invasion triggers the infiltration of, among other cells, neutrophils, which are known to consume oxygen [3] when activated. The questions he had in mind were in the line of:

And there were many more questions at that time and then even more to follow… but the complexity was ramping up exponentially regarding what we could effectively measure using our methodology.

So to address these questions, we needed several components:

An example of the data we would generate with these tools is shown in Figure 3.

Figure 3: Example image generated in this work. Section of the colon of a Guinea pig infected by Shigella flexneri. Maximum intensity projection of 40 µm thick slice, acquired with a 40x oil NA=1.3 objective on an automated spinning-disk. Green: Shigella flexneri. Blue: neutrophils. Red: EF5 signal. The width of the view is about 700 µm.

If you think about it, imaging infection using our microscopy methodology offers a unique set of features:

With Ellen, we focused on the technical aspects of the project and on the components listed above. I was in charge of data management and analysis.

Normally at the beginning of a project, I try not to know too much regarding expected biological results. Plus, being a facility engineer and a physicist by trade, I had very little knowledge about Shigella at the time, so I was completely deadpan when I matter-of-factly reported to Benoit and Ellen that the oxygen consumption by neutrophils was really, really small compared to the massive depletion the Shigella foci generated.

For me, it must have been a well-known fact.

This was NOT a well-known fact.

Benoit told me later that many people in the field associated O2 consumption with only neutrophil activity in the gut, because hypoxia in tissue was initially studied in the context of sterile inflammation during neutrophil infiltration (wounding the tissue).

The images clearly revealed that the main EF5 signal was localized near the bacteria foci and not on the neutrophils. Benoit was obviously elated and made us redo the experiment a second time, then a third, a fourth, and a fifth time. His excitement quickly rose with coherent results, and he started in vitro experiments in parallel to see whether the same phenomenon could be reproduced outside the tissue, with bacteria densities that mimicked those found in vivo in infection foci. He found supporting data for this phenomenon for Shigella and also generalized it with several other pathogenic facultative anaerobes, see Figure 2e-g and Supplemental Figure 3 of the paper.

This in part started what is related in the article linked to this blog. We went further from what we relate here, so please see the paper. I remember fondly the moment where I was welcomed to present these initial results to the Sansonetti lab. I initially was not completely sure I understood the reasons for their excitement and reactions.

This was the first time an ‘outsider’ – a non-biologist – was invited to present collaborative work with the Sansonetti lab, and JY knocked everyone’s socks off!   We had a fantastic collaboration and a superb biological story,  one that we are happy to continue to share with all of you. 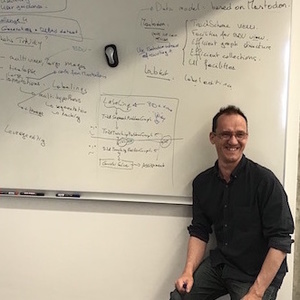